Leah Adair is a delight! I’m lucky enough to know her, and today you get to know more about her and her journey with obsessive-compulsive disorder (OCD). Leah is full of positivity and insight and realizes that even with the torture that OCD has caused in her life she still has plenty to be thankful for. Thank you for being here, Leah!

When did you first experience symptoms of OCD, and how did you eventually realize what you’d been experiencing might be OCD?

I didn’t fully understand OCD until it upended my life five years ago. Prior to this time, I had symptoms, but they were manageable. As a child, I often apologized over and over and over again for things that weren’t even my fault. I had worries that I said something blasphemous to someone during a conversation. I would rerun conversations over and over in my head after talking with someone. I also had extremely inappropriate words get stuck on a mental loop in my head. Neither of these obsessions took a major toll on my life. I just chalked them up to being weird thoughts.

In the fall of 2010 I was hospitalized in the ICU with double pneumonia. I was on life support at the age of 28. It was a very scary time for my entire family. My parents are both medical professionals and they knew how dire this situation was. As I’ve done more research on OCD, I believe there could be a link to major medical experiences and OCD in some people. I had frequent ear infections as a child and ended up with tubes in both ears as well. Both of these major illnesses could have had an impact on my brain chemistry. Who knows—OCD also runs in families. My brother has it and I know of a few extended family members with an OCD diagnosis.

Five years ago I was in the throes of parent-teacher conferences, we were hosting some out-of-town guests, and we were getting ready to go out of state for the weekend. I was going about my day-to-day life when a thought popped into my head. Most people would just let a thought like this pass on by. My brain got stuck in this thought. It cycled through my brain nonstop. I couldn’t turn it off. Everywhere I looked, my obsession seemed to be there. It was torture. I couldn’t sleep for several months. I’d average three hours of sleep per night. I was barely able to eat and in a span of four months I lost over 30 pounds. This isn’t a diet I would recommend to anyone. I was tormented by this thought (obsession), and my compulsion was to ask for reassurance via my parents and the internet—I was constantly searching the internet to figure this out. I didn’t know it was OCD until I ran across an article about different forms of this illness. I always equated OCD with order and cleanliness. I’m someone who wants solutions to most everything. I scheduled an appointment with a therapist, started researching all of the natural remedies for OCD and anxiety, and dove into an intense workout regimen (thinking the endorphins would kick this nasty beast to the curb). The therapist I originally went to had no idea how to treat OCD. I also visited a psychiatrist and she basically just wrote me a prescription and said “good luck.” As I continued to scour the internet, I found a blog by Jackie Lea Sommers. Little did I know, she lives in the Twin Cities as well. She has a whole section of her blog dedicated to OCD. It was from interactions with her that I found out about exposure and response prevention (ERP) therapy. I went to Dr. Chris Donahue in Saint Paul for 15 weeks of ERP therapy. It was hard and intense, but I can now say my symptoms have improved by 85 percent. I’ve acknowledged that OCD is something that will never completely go away. When an individual has diabetes, they have to manage their insulin. If a person is in remission from cancer, they still need to go in for check-ups and have an awareness of their body. I view ERP as the toolbox that helps me function. I also credit an amazing community of friends, a supportive and loving family, exercise, and medication.

Will you share your “stickiest” obsession with us? Did you have to approach it from a different perspective, or has a tried-and-true method helped?

Gah. Here I am thinking I’ve come so far . . . but I’m still afraid to share my stickiest obsession with the internet. OCD is so tricky. It’s like watching the worst movie you’ve ever experienced over and over and over again.

The website Beyond the Doubt has a short summary of different themes people have.

The main themes that have been present in my life are:

Having OCD is difficult for anyone, but it can be particularly painful as a parent. You’re a new mother—how have you dealt with obsessions and compulsions while adjusting to a whole new lifestyle and set of responsibilities?

I was very open with family and friends prior to having our son. I wanted them to know I was afraid of how this disorder could manifest as a mom. Thankfully, it hasn’t been bad. During pregnancy my symptoms actually subsided quite a bit.  As a mom, things are so busy that I don’t have as much time to give to my obsessions. Parenting is hard, but it’s also been a great distraction. Once in a while I will get “stuck” but thankfully I am able to tell my husband or a close friend that I’m having a difficult time. I also have recognized when I need to have alone time, or do something to recharge. I’ve found that I get really exhausted in large groups where I don’t know a lot of people.

Speaking of family, how did you tell loved ones about your diagnosis and how they can help you?

When OCD first presented itself, I contacted my brother. I think he was diagnosed in high school or college. He was super helpful and encouraging. It also helped to know that I wasn’t alone. After telling my brother, I told my parents. It took me a few months to talk to my husband about it. I think a big thing I was afraid of telling him was that part of the OCD theme I struggle with had to do with him. Over the course of the year when I was diagnosed, I gradually began telling close friends. Then, one night a few years ago, I wrote a post about OCD. It was extremely liberating. It felt like I broke free of chains that were holding me back. Prior to this disorder wreaking havoc on my life, I had so many stereotypes and stigmas of people with mental health issues. I wanted society to know and understand that it could happen to anyone. Family and friends have been wonderful. It’s been beautiful to see awareness spread about this illness and to have people love me through it. My husband, Thom, has been amazing. He’s so calm and loving. I don’t expect him to ever fully understand OCD, but I’m glad he loves me through it. I thank God every day for the support system I have. 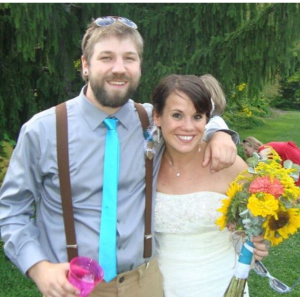 You’re the OCD Twin Cities secretary. Why did you want to get involved in a nonprofit dedicated to OCD awareness in your city?

I felt like I needed to give back to the OCD community. I also have a strong passion for mental health awareness. The late Senator Paul Wellstone said, “We all do better when we all do better.” I believe this is true. We need each other to survive. No one is meant to fight alone. Your story isn’t fully written, and it’s definitely not over. I’ve loved getting to know the other individuals on the OCD Twin Cities board and helping create events and awareness about OCD. It’s so important for family and friends to have ways to support their loved ones as they navigate this diagnosis. I feel like OCD Twin Cities has events for everyone, whether you’re a mental health practitioner, an individual with OCD, a partner, a friend, or a family member.

I’m someone who cares deeply about others and I love helping people find ways to manage their symptoms. OCD can feel really isolating at times, and I want individuals suffering with the illness to know recovery is possible.

What do you consider the most harmful misconception about OCD, and how do you think we can help clear it up?

I think the most harmful misconception is that OCD is such an asset. I had a health provider during a physical say to me, “Your house must be so clean since you have OCD!” I didn’t have the energy to explain to her that my OCD symptoms have nothing to do with cleanliness. I think ways we can clear up misconceptions of any kind is to stop dehumanizing people. It’s so easy to make stories up about people and be fearful of mental illness. One in four people have OCD. It’s as common as childhood diabetes. Your friend, neighbor, pastor, barber, taxi driver, or family member could have OCD. It’s not something that is visible to people. It’s often something that individuals suffer with in silence. I hope and pray that our society continues to create more understanding around all mental health disorders.

If you could share just one piece of advice with other with OCD, what would it be?

The piece of advice I would share is: You’ve survived 100 percent of your hardest days; don’t be afraid to get help or admit you are not okay. A whole community is out there waiting to embrace you with loving arms.