When today’s guest, Aneela Idnani, was at the 2017 OCD Conference in San Francisco, she met a man from London—Stuart Ralph of the OCD Stories—and told him she was from Minneapolis. He said, “You should meet Alison Dotson. She lives in Minneapolis.” It took her traveling to California and chatting with a man from England to ultimately connect with me back home—and I love that! Part of me thinks, “Geez, Alison, you could do a better job of networking with people in your own city,” but another part wonders at the forces that pull people together.

Aneela, as you’ll learn as you read on, is smart and innovative and is changing people’s lives for the better. After struggling with compulsive hair pulling, or trichotillomania, for years, she finally learned she had a disorder—and once she knew how to help herself, she set out to help others. My favorite kind of person.

Q. You’ve lived with compulsive hair pulling. How did it affect your daily life?

As a kid, I was a hair twirler and thumb sucker. I started hair pulling in my tweens and I didn’t really know why back then. It was just soothing and comforting. I now understand, through actively taking the time to look back and analyze, that my hair-pulling disorder started after I moved to a new town and got worse after my dad fell sick with cancer. The biggest effect trichotillomania had was on my own self-esteem. I was always nervous people would find out. It consumed me. I hid my pulling—mostly eyebrows and eyelashes—using makeup. But I always felt people could tell. I let this vicious cycle feed a voice of negative thoughts—I’m ugly, I’m not worthy of love, I’m stupid.

I sort of went through the motions growing up. Numb from my hair pulling and the loss of my dad. Sure, I had friends—great friends—but still always felt very alone. And I let myself give up on things I loved like going out for the basketball team or playing saxaphone because of my fear of being found out.

Q. Many people with OCD and related disorders say it took them years to get the proper diagnosis and the right treatment. How did you realize you had a more serious problem and not just a habit, and how did you go about getting help? Did you go through a period of being misunderstood and misdiagnosed?

In the past few years I’ve met thousands of people with trichotillomania, dermatillomania, and other body-focused repetitive behaviors (BFRBs). From all the stories I’ve heard, one common theme has emerged: For most of us, we spent our early years not knowing that these compulsive pulling and picking behaviors were in fact mental health disorders. We hid in shame and fear of judgment because of the perception that these actions are choices. We felt alone in the battle. I also found that most people used Google to figure out that this “thing” they were doing was an actual thing!

This education and understanding is a huge hurdle that millions have yet to cross. But when they do it starts the true journey to recovery.

In my twenties, I realized my hair pulling had become a serious problem. It was affecting my life too much—mostly the physical manifestation fed my insecurities and my negative self-speak. That translated to actions that held my life back. This is when I did my Google search, found the term “trichotillomania,” and found the nonprofit organization for people like me: TLC Foundation for BFRBs.

After I took the time to understand the disorder, I still hid and met secretly with a psychologist and a hypnotist. Neither worked for me because neither understood the disorder because of lack of education. I also joined an online Facebook support group and started using some of the strategies from there.

Finally, about four years ago I met with a psychologist trained by BFRB.org. She used cognitive-behavioral therapy (CBT) and other processes designed to help people with dermatillomania and trichotillomania. It was during this time that I learned that while these disorders are classified as OCD-related, they are not exactly OCD. The thought process is different and therefore the treatments are different. 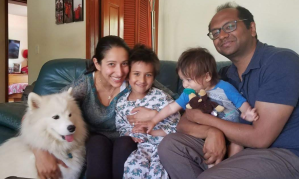 Q. How did you tell your loved ones about your diagnosis? Did many already suspect your BFRBs had become an obstacle for you?

Ha. I was caught! Three years ago, as I was getting ready in the morning, my husband caught me without eyebrows. I just hadn’t gotten my makeup on in time. He asked me and in that moment I decided to stop lying and finally shared my mental health condition with the man who promised to love me in sickness and in health.I don’t know if others suspected. I think the opposite, because sometimes friends would actually compliment my eyebrows—not knowing they were drawn on!

Q. Let’s say a school-ager approaches you and says, “I can’t stop pulling my hair, and my classmates have started to notice and make fun of me. Even my teacher seems annoyed and tells me to just stop because I’m distracting everyone. How can I help them understand?”

The best way to help people understand something foreign is to compare it to something familiar. To help someone understand BFRBs, I would ask that person, “Would you tell a person with diabetes or cancer to ‘just stop’ having those issues?”

Whether it is diabetes, cancer, or BFRBs, the body is doing something internally that we have no control over. It’s just that for hair pulling or skin picking or nail biting, it causes an external action, giving the appearance that there is a choice and we are doing this voluntarily to ourselves.

I think when we can get others to understand, then we will be met with compassion instead of judgment. The unfortunate part is that we have to do the hard work of explaining and hope that others have open hearts and minds to take in the knowledge we are imparting.

Q. How did you go from struggling with hair pulling to founding your own company, HabitAware, through which you help countless others with BFRBs?

I’d probably still be eyebrow-less if my husband, Sameer, hadn’t caught me a few years ago. After I told him that I had trichotillomania we talked about it and he began noticing my behavior more. Then one evening after work, while relaxing on the couch watching TV, his hand slowly pulled mine away from my head and I turned to him and said, “I wish I had something that notified me.” We are techies and knew it was possible. When we couldn’t find it, we set out to build it. We formed a team at a Minneapolis hack-day event and when the prototype worked for me we kept working nights and weekends until we had better—and more—prototypes to test with other people. And when those worked for them, we just kept pushing and the doors kept opening until we knew we had to give up our “real” jobs to make our idea a reality for others. That’s how we started HabitAware and it’s really been incredible the number of lives we’ve been able to change since our March 2017 launch!

Q. Tell us about Keen, the smart bracelet designed to bring awareness to and refocus users from BFRBs.

Keen is that thing I wished for that would notify me when I was pulling. Keen is a smart bracelet, or habit tracker, that uses customized gesture detection to bring awareness to an unwanted behavior. Training Keen takes less than a minute with our mobile app. When Keen senses a mathematical match between an actual hand movement and the trained gesture, it vibrates. This vibration, in a sense, distracts, the brain. It shifts the behavior from the subconscious to the conscious mind. It wakes a person up and is just a gentle reminder that “Hey, your hands are not where you want them to be.” With this newfound awareness, a person wearing Keen now has the power to make a new choice and can retrain their brain away from the unwanted behavior and toward healthier replacement strategies.

I am so thankful for this disorder because it led us to inventing Keen and to helping so many around the world find hope, peace, and a powerful tool to help overcome!

Q. How can my readers help spread awareness of BFRBs?

We are in this together and if we want others to understand the pain of mental illness we need to share how are lives are affected. We need to work together to end the stigma and fight for equality and access to mental health care. So my ask of your readers is to share my story and to share their story.

Q. If you could share just one piece of advice with others with BFRBs, what would it be?

I believe hiding our disorders, because of fear of judgment, is holding us back from recovery. Our secrets are making us sicker. We need to be open and vulnerable—knowing that some people just won’t appreciate the gift you are sharing with them. Dismiss them and keep sharing anyway. It will help you release the burden. If you are hiding, please let it out! It can be writing in a journal, painting on a canvas, or talking to a friend or loved one. You never know whose life you can touch or how your sharing can cause a ripple effect! I wish you love, strength, and awareness.

1 reply to Inventor of the Keen: Aneela Idnani