This week we’re chatting with Julie Burnfield, who runs a podcast called Living with Obsessive-Compulsive Disorder with her husband, Andy. I kept seeing Julie and Andy at the conference in July 2014, but I never met them—it wasn’t until after I was back home in Minneapolis that we connected and Julie invited me for an interview. It took a while to coordinate our busy schedules, and in the meantime we got to know each other via email and Facebook.

Julie writes beautiful poetry about her life with OCD, loves spending time with her husband and daughter, and inspires her listeners and Facebook followers with her message of hope and courage.

Thanks for being here, Julie.

Let’s get right down to it: You have OCD. How long do you think you’ve had it, and when were you diagnosed?

I can remember aspects of my OCD as early as 4 or 5 years of age when I would have to confess all the bad things I had done in my day to my dad as soon as he came through the door at night. If I didn’t confess, the buildup of anxiety (I called it a tummy ache at the time) would worsen and worsen to the point where it was unbearable. I was diagnosed with OCD when I was 22 years old. I knew there was something wrong with me all through high school and college but never had a name for it until I switched my major to psychology and we came to the chapter on OCD—lightbulb moment!

Can you share some of your obsessions and compulsions? Did you have any that seemed harder to overcome than others?

I have had pretty much every type of obsessions and compulsions over the years. They seem to morph from one kind to another; just when I think I have a handle on OCD in one part of my life it moves to another new part and I have to start learning to deal with it all over again. I have had contamination issues, checking, mental contamination, ruminations, intrusive thoughts, homosexual OCD, relationship OCD, pure O, pedophile OCD , religiosity, etc.

The hardest to deal with and to overcome was the pedophile OCD. I chose not to have a child for 10 years after getting married because of it and then when I did eventually have a daughter it was extremely hard to deal with and overcome; I still have many bouts with it when it can really get me down. I think it’s the hardest to deal with because my daughter is around me all the time and always in my head. Also, she is the person I care most about in the world and so having those types of OCD thoughts about her make them the most excruciating.

Once you knew you had OCD, how did you begin to recover from it? 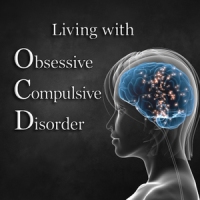 You host a podcast, Living with Obsessive-Compulsive Disorder, with your husband. What made you decide to start it?

One day my husband bought some recording equipment on a wild hare to record a show with his best friend about nerd stuff! After that didn’t pan out he randomly asked me one day if I would ever think about recording an episode where I talked about my OCD. My first response was “Hell no!” Well, 114 episodes later you can see how well my initial response panned out! We recorded one episode and it kind of went from there. I started to really enjoy recording, and talking to Andy about my OCD was very cathartic. We never thought anyone would listen to our little show, but now we have about 500 listeners a week and almost 1,200 followers on Twitter. We first started doing episodes about my story and then when we were done with that we started interviewing other people with OCD, and other people in the OCD world such as doctors, therapists, and other experts in the field. It has been an amazing run and I hope we keep doing it for another five years.

Has interviewing so many other people with OCD helped you deal with your own symptoms?

It really has. It has helped me realize that I am not alone and that whenever OCD makes me believe I am experiencing something new or “unique” I can reach out to others I have met through the podcast and run my symptoms by them and quickly realize that there is nothing new under the sun when it comes to OCD, and just knowing that fact makes me feel so much better. Having people to connect with through our podcast has been the biggest blessing I could ever imagine. I never imagined that I would have such an incredible support group of friends to which I can turn at a moment’s notice, friends who have been where I am and on whom I can lean and know that they understand completely.

Are there any episodes that really stand out for you, any interviewees you really connected with?

I really connected with Shannon. the content of our OCD is very similar and we clicked from the very beginning. I count her as one of my main confidants and my go-to girl when things are getting rough. I actually had the pleasure of meeting her a few years back when she made a trip to Texas to meet me; it was so much fun and honestly the first time I had ever physically met another person with OCD.

I also connected with Aubrey and have met and hung out with her and her family numerous times as we both lived in Texas at the same time. Her strength is always a source of encouragement to me and her resolve after everything she has been through in her life inspires me to this day.

How are you doing now? Do you still sometimes struggle with obsessions or compulsions?

It has been 14 years since I was diagnosed and about 12 years since I have been on one medication or another. Yes, there are definitely times that I still struggle. I would say that my main struggle now is with pure O. My obsessions and compulsions are internal, mental, and although they are not seen to the world they are still very real, and very real to me. There are triggers that sometimes still bother me like being in a hotel room or touching someone on my “dirty list,” but I find that now that I have the tools to fight these obsessions I can overcome them for the most part as opposed to being completely paralyzed by them in the past. I don’t think we are ever cured—we just learn to cope, learn how to be ourselves despite our OCD.

You’re back to school to get your master’s degree in counseling, and you plan to specialize in the treatment of OCD. What led you to this decision?

The last few years have been very rough for me both physically and mentally. I have had cancer, blood clots, job crises, and major spikes in OCD just to mention a few. Funny how when bad things happen to you it forces you to reevaluate your whole life. That was my experience and when I did so I thought about my life and where I want to be when I’m 40. The answer was not that I still wanted to be at my current job doing the same thing I have for almost 15 years. I want to make a difference in the second half of my life and though I feel I have done so through the podcast, I can only go so far in helping people and telling them they aren’t alone. My help so far has been limited to shared experiences of OCD and I decided that I wanted to take the next step to be able to help people with OCD even more, to do so in a professional manner. My undergrad degree is in psychology and so starting my master’s in counseling in order to get my LPC and LMFT certifications seemed like the logical next step. I am almost finished with my first class and am loving it more than I could ever imagine. Three years and I will be ready to start my own practice and be able to help the OCD community even more.

You recently got an incredible tattoo. What’s the message behind it?

The tattoo means Faith…Hope…Love…I’m still here. The semicolon represents a sentence the author could have ended, but chose not to. The author is you and the sentence is your life. Don’t end it. Start new. Check out projectsemicolon.com. It is a faith-based movement dedicated to presenting hope and love to those who are struggling with depression, suicide, addiction, and self-injury. The reason I got the tattoo was because on my left forearm I have several very severe scars from cutting when I was in my early twenties. I wanted something meaningful to cover them up and that is why I chose the design I did. I’m still here, my story hasn’t ended, and just because I have the history I do doesn’t mean my story is over. There is always hope and now I see hope instead of scars every time I look at my arm.

If you had one piece of advice to offer someone with OCD, what would it be?

Reach out, don’t turn inwards. You are not the only person who has felt the way you feel, you are not the only person in the world who has thought the terrible things you have thought. There are people who know exactly what you are going through and people who want to help. It is only by coming together that we realize we are not alone. OCD is such an isolating disorder that’s what it wants to do, it wants us to think we are depraved and disgusting and alone. The truth is we are not. We have a mental disorder. A mental disorder is nothing to be ashamed of any more than diabetes or cancer is. You are not alone…someone cares.