Happy Tuesday! Today we’re hearing from Anna Wetrosky, who’s graciously shared her experience with multiple diagnoses and residential treatment for obsessive-compulsive disorder (OCD) and anorexia. Anna is a generous volunteer with a local nonprofit and a strong person with a lot of insight to offer. Thank you, Anna!

How long have you had OCD? And how long did you experience symptoms before you were diagnosed?

I’ve had some symptoms for as long as I can remember—they weren’t anything obvious when I was younger unless you were a specialist probably. I was diagnosed with an anorexia when I was 12 years old, but that wasn’t considered an off-shoot of OCD in 1997. I received an actual diagnosis in 2000.

Once you were diagnosed, how did you go about treating it?

I was diagnosed after being hospitalized, so I had 24/7 care for two weeks when I was 15. Then I was moved to outpatient once a week, then once every two weeks until I was 18. I went back into outpatient therapy a few years later in college and have been in more inpatient, partial programs, and outpatient during various times since then.

You went through residential treatment at Rogers Behavioral Health in Wisconsin. Why did you decide to commit to that level of treatment?

I researched centers and contacted Rogers after I had been in multiple treatments for seven years without the success in lowering my OCD symptoms that I was looking for. I hadn’t received much information on proven treatments for OCD even though I had been diagnosed with it years before. I had been bounced around in general treatments and was feeling frustrated and angry. My age and growing independence were factors in making a big change without the okay of anyone else. 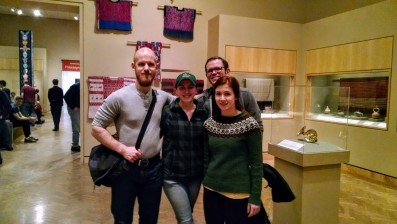 Tell us what a typical day was like at Rogers.

I was there about ten years ago, so things may be different now. The staff woke people up to get their medications before breakfast if you took them along with your weight and vitals. You might not get weight and vitals taken in a non-eating-disorder track, I’m not sure. After that was a buffet-style breakfast. Some people had different dietary requirements. Your exposures happen all throughout the day and vary depending on your specific fears and hierarchy. One of my exposures was to eat varying amounts of my food—between 75 and 100 percent. I struggled with wanting to eat nothing or “having” to eat a certain amount. Everyone in my house also had at least one exposure dealing with food. After that was morning hygiene. I had trouble brushing my teeth in a reasonable amount of time, so I would time myself—not brushing my teeth for more than two minutes.

Then we sat in a group with our therapists and other clients and checked in with how our exposures were going. We carried around small black books with our symptoms and checked about how many times we did them during the day. This was also dedicated time to practice our specific exposures and rate them as our anxiety went up and down—there are staff members present during this time who can be helpful for support. I had exposures to do on the internet surrounding Facebook, using the phone, and in general conversing with people in different ways. Everyone had certain staff members that they got along with well or didn’t like to be around—that was something I didn’t like because of my avoidance surrounding interpersonal issues.

Lunch was similar to breakfast, and then we did some cognitive restructuring and thought challenging. I had a pretty constant thought (still do sometimes) of “everyone hates me.” I labeled it as mind-reading, listing the reasons that led to me thinking it was true, then writing only the things I knew to be accurate.

Experiential therapy in the afternoon was usually an outing for clients who had the okay from their therapist to do exposures and practice outside of the center. One day we went to the mall where I practiced trying on clothes and making small purchases (something I had avoided more and more over the years). Other outings went to Hobby Lobby and the local library. Making clients behave outside was a challenge for the therapists—don’t waste your time trying to bend the rules with the cool kids. You’re paying to be in treatment!

Supervised assignment work happened in the afternoon. Since every person has a different background, we worked on some of the same things but also had individualized goals. A friend of mine had experienced sexual trauma, so her assignment was to write down what happened to her since she could barely talk about it. As she became more comfortable, she told her therapist and courageously eventually read the story to the entire group.

Since I was in a house that worked with eating disorders along with any other OCD issues, we sometimes split up for meals as we progressed in our treatment. Toward the end of my stay I ate dinner in the hospital cafeteria (all by myself!). Not having to be watched while you eat is pretty exciting when you’ve been in eating disorder treatment for months. Once you progress in your treatment if you are working on an eating disorder, you also get to go out to eat with a few people, by yourself, or with your therapist.

After dinner we would all get together to review our goals, then have some more supervised assignment work where we’d spread out around the building if we wanted. Finally, we had a short group activity or took care of chores, laundry, and so on. Weekends were more lax with more free time. We spent a lot of time sharing music (pirating also—which is funny to think about now) and talking about our lives. Someone had a guitar, so we’d play that—someone else had a board game. There are TVs to watch movies, cable, and computers to use the internet. It’s like jail, but a lot better.

How did you adjust to daily life after residential treatment? Did you experience any hiccups without 24/7 access to care?

I had a little different experience after leaving. It was recommended I go to another inpatient program since I couldn’t do the partial program at Rogers (I was still having suicidal thoughts at that time). I honestly don’t know what the reasoning for that was, but that was what happened. The hardest thing for me to deal with when getting out of residential treatment was dealing with relationships issues. I’ve always had the hardest time dealing with those, so not having someone to talk to right away when starting out was hard. But it is also freeing, because you can get really sick of constantly being monitored.

You have also been diagnosed with an eating disorder, bipolar disorder, and borderline personality disorder. Has treatment for one disorder informed how you approach another? What challenges do co-morbid diagnoses present?

I haven’t changed anything in particular regarding treatment due to one disorder, but they have influenced each other subconsciously for better or worse. When I try to eat well to deal with the eating disorder, that raises my anxiety and can lead to more borderline and OCD symptoms. It can also help, because eating regularly is better for blood sugar and helps with depressive swings. There are general things I try to follow that helps everything—getting enough sleep, eating well, and exercising that typically apply all around.

You volunteer with OCD Twin Cities. Why did you decide to give back in this way?

I decided to volunteer because I had been through enough treatment that I felt I had extra knowledge that wasn’t necessarily being used by me. It was also a good chance to meet people and get involved. There is something satisfying about hoping what what you’ve learned from your negative experiences could help others not make the same mistakes.

If you could give just one piece of advice to others with OCD, what would it be?

Probably to remember that there’s no silver bullet. As shiny as that idea can be it’s just not realistic in 99 percent or more of cases. People who aren’t diagnosed with psychiatric disorders fall into this trap all the time as we can see—just look at the diet industry. In a way it seems more overwhelming that there’s no silver bullet—so many things to think about. You may have to start small and take one step at a time if necessary.

I know this is two things, but continuing exposure therapy on my own has been insanely helpful. It’s so easy to get out of treatment and be like, “Okay, I’m better now. Don’t have to think about that stuff anymore.” But again, unfortunately, for 99+ percent of people your OCD/other disorder won’t go away. It will just need to be managed. I had to use some exposure therapy to write these answers—I honestly avoided it for two months, as Alison can attest to, even though I was glad to share my experience. But finally I had to sit down, start an Excel spreadsheet, start setting goals and rating my anxiety as I went along. Here I am doing similar exposures around social media and putting myself in the spotlight ten years later. But it’s done, so go me!